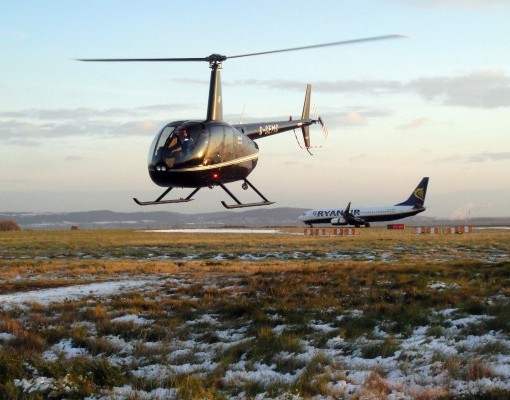 Want to fly a bigger, faster helicopter? Take to the skies in a state of the art Robinson R44 Raven II helicopter.

Take to the skies in a state of the art Robinson R44 Raven II helicopter. This 30 minute helicopter flight experience allows one person to have hands on controls of a helicopter at speeds over 100 mph.

Your personal flight instructor will explain and demonstrate how the controls of the helicopter work before handing them over. The spectacular visibility from inside the helicopter will allow you to see Liverpool city from the air. Departing from Liverpool John Lennon Airport the helicopter be departing and arriving in-between the big jet airliners.

The participant will be allowed to bring one observer along to view the flight.

After the helicopter flight is completed, a signed certificate from the instructor will be presented.

There are no reviews yet.

Due to the latest Government Lockdown, some of services are currently restricted HOWEVER under special circumstances we are operational for dedicated Charter Flights and one to one Professional Training. We are still here for you 24/7 - 365 days a year for enquiries, please call or email and we will come back to you with options or advice as very soon as possible, our 24/7 contact is by email on info@helicentre.com or alternatively do call our Head Office on 0151 448 0388 between the hours of 0900 and 1700, 7 days per week. Please Note; We have taken all of the necessary precautions to ensure that our customer's health, safety and wellbeing is our main priority, as always, and do have strict cleaning procedures and Social Distancing measures in place at all times. From the whole team, stay safe, stay well and we hope to hear from you soon!

Thank you for subscribing.